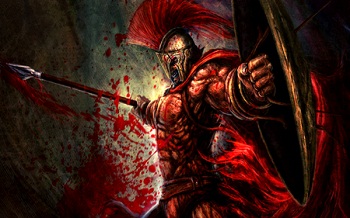 A Blood-Splattered Warrior is exactly that, a combatant drenched in blood. This is often used to show how insanely badass the character is due to the implication that they either took multiple wounds yet stood their ground, or were drenched in their opponents' blood. Or both.