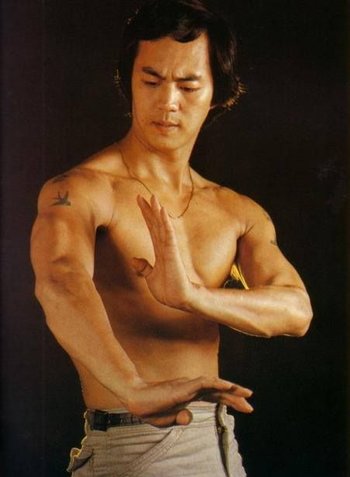 He removed his shirt five minutes before the director can say "ACTION!"
Advertisement:

Starting his career as a model, Tommy Tam made his debut in the second installment of the One-Armed Swordsman movies, before his role in Dead End made him a fan-favorite. Recognizing the potential in Tommy Tam, Shaw Brothers director Chang Cheh quickly groomed him into a replacement for Jimmy Wang Yu, after Wang-yu jumped ship and terminated his contract with Shaw Brothers. As his career snowballs from one role to another and he started becoming a household name, Tommy Tam soon adopts the name "Ti Lung", a slightly modified spelling of "Delon" (Lung's childhood hero) as his stage name.

After starring in Vengeance! (1970), where he had a minor supporting role which is a Small Role, Big Impact, Ti Lung would become fast friends with his onscreen younger brother, David Chiang, and the two of them would star together in several films consecutively. Together with their mentor Chang Cheh, the combined star power of Ti Lung, David Chiang and Chang Cheh would be referred to as "Shaw Brothers' Golden Trio" in the early 1970s.

Churning out one martial arts epic after another, the long-running collaboration between Lung and Chiang eventually comes to an end after Blood Brothers, where Ti Lung won the Special Award for Outstanding Performance at the 11th Golden Horse Awards. Lung would terminate his contract with Shaw Brothers in the 1980s, and would find better opportunities in Golden Harvest after being cast as Sung Tse-ho in A Better Tomorrow, putting aside his presence in wuxia cinema in favor of heroic bloodshed shoot'em ups.

Despite their separation, Lung and Chiang still maintains a close friendship with each other, showing up in martial arts alumni reunions and social gatherings.

His only child, son Shaun Tam Chun Yin, is also an actor.