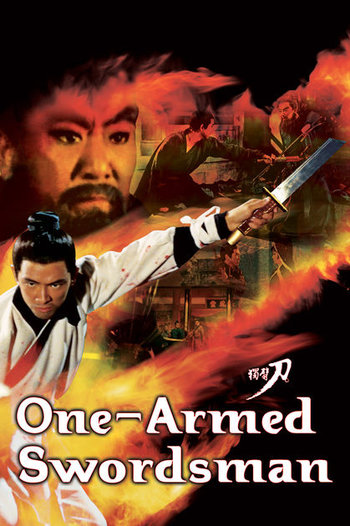 The One-Armed Swordsman is a series of Hong Kong martial arts films produced by the Shaw Brothers Studios between 1967 and 1971. The films follow a somewhat Darker and Edgier take on the Wuxia genre (martial arts), where our lead is a male Anti-Hero who gets in violent sword fights, and are Bloodier and Gorier than previous wuxia films.

The series focus on — guess what? — one-armed swordsmen who lose their arms in the aftermath of a fight, and eventually decide to take up revenge despite their handicap. Ironically, every sword fight against their enemies results in a Curb-Stomp Battle.

A fourth movie, titled The One Armed Swordsmen (yes, men. Plural.) was released nearly a decade after the original film. Reuniting the two original actors of the eponymous swordsmen, this movie stars Jimmy Wang-yu as Fong Ping and David Chiang as Li Hao, two swordsmen, each with one arm, stumbling into each other while on their respective quests for vengeance.

See also One Armed Swordswoman, a Taiwanese adaptation with a Gender Flipped protagonist.

The films in general apply the following tropes:

Tropes applying to Return of the One-Armed Swordsman:

Tropes applying to The One-Armed Swordsmen: 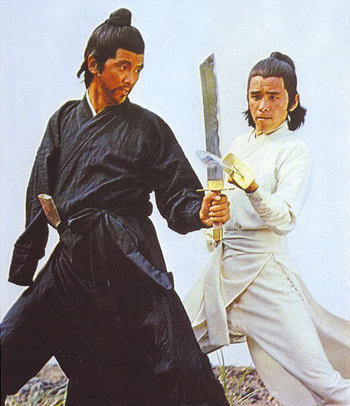 The average troper has equal amount of arms as both of them combined. Hopefully.