Film / Duel of the Ironfist 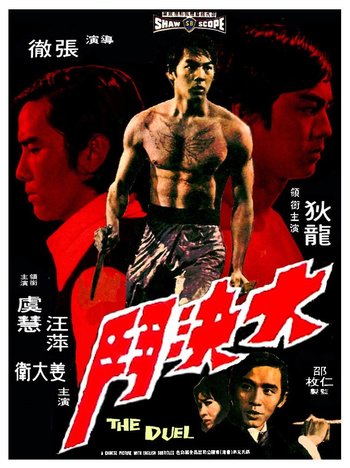 Somehow, this poster barely contains even a fraction of gore in the actual film.

Duel of the Ironfist, also known as The Duel is a 1971 Shaw Brothers Martial Arts Movie directed by Chang Cheh, starring Ti Lung and David Chiang, respectively as the son of a high-ranking mob leader and said mob leader's best hitman.

Set in 1930s China, the aftermath of a gang war left the brothers Tang Ren-jie (Ti Lung) and Tang Ren-lin (Ku Feng) as the heirs of a mob family after their father was assassinated. But with the rival gang hot on their trails, both brothers are forced to lay low, with Lin taking over their father's position to act as scapegoat for his brother, Jie to flee. With the help of their father's most trusted henchman / assassin, Chiang "The Rambler" (David Chiang), Jie managed to settle down with his long-time girlfriend Butterfly, but later on Jie discovers the true circumstances of his father's death. Everything else can only lead to a bloody, violent conclusion for Jie and Chiang...

This is notably one of the many old films which serves as inspiration for John Woo, and can be summed up as Heroic Bloodshed, but with knives. The typical elements are there, including bromance and male bonding between the two male leads, epic action sequences where the two leads takes on legions and legions of extras, a huge onscreen death toll, and gore. Loads and loads of gore.

Not to be confused with the Steven Spielberg movie, Duel, which is coincidentally also released in 1971.