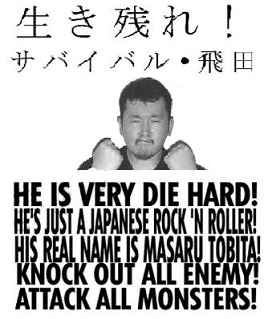 Born Masaru Tobita in 1970, Survival Tobita is a Japanese Professional Wrestler and promoter best known for his work in his Saitama Pro Wrestling Company and his feud with Mokujin Ken, or Ken the Box, a character based on Mokujin from the Tekken series. SPWC was primarily a one-man show, with Tobita facing off against different monsters, some of them played by Naoshi Sano. He started as a Jobber for Super World Sports and would compete for FMW, Michinoku Pro Wrestling, Dramatic Dream Team and other promotions. He is a 3x DDT Iron Man Heavymetalweight Champion

as Jigoku Soldier. SPWC is considered a standard bearer for "Japanese indy sleaze."