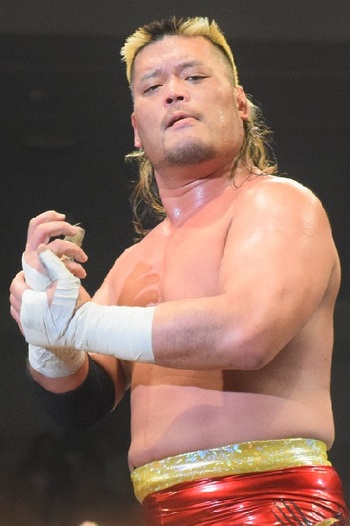 Hiroyoshi Yamamoto (born March 23, 1971), better known by his ring name Hiroyoshi Tenzan, is a Japanese professional wrestler who works for New Japan Pro-Wrestling. Besides a successful career as a singles wrestler, being a four-time IWGP Heavyweight Champion and a one-time NWA World Heavyweight Champion, Tenzan is known for his tag teams with Masahiro Chono and Satoshi Kojima, winning the IWGP Tag Team Championship five times with each one, which alonside one reign with Osamu Nishimura, makes Tenzan a record 11-time IWGP Tag Team Champion. With Kojima, in 2008, they also won the World's Strongest Tag Determination League in All Japan Pro Wrestling and the G1 Tag League in NJPW, becoming the only tag team which has done it; and the NWA World Tag Team Championship once.