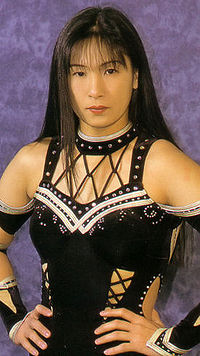 "In his 2002 book Top 100 Pro Wrestlers of All Time, John F. Molinaro refers to Manami Toyota as 'The Ric Flair of women's wrestling, arguably the greatest female pro wrestler of all time'. It's heavy praise, but it just may be warranted. Toyota raised the bar for women's wrestling to even greater heights in All Japan Women during the 1990s. However, unlike Flair, Toyota was both a master technician and a high flyer, dazzling fans with her moonsaults, suicide dives, and diving headbutts off the top rope."
— Pat Laprade and Dan Murphy, Sisterhood of the Squared Circle: The History and Rise of Women's Wrestling
Advertisement:

Manami Toyota (born March 2, 1971) is a retired Japanese professional wrestler, and widely regarded as the greatest female wrestler ever, with some contending that she is the greatest regardless of gender.

Beginning her career at the young age of 16, Toyota made her wrestling debut in 1987 with All Japan Women's Pro-Wrestling, and gained widespread attention at Wrestle Marinepiad 1989, where she and Mima Shimoda defeated Toshiyo Yamada and Etsuko Mita in an opening match that upstaged the more established wrestlers on the card. Her rise continued throughout the early 90s, establishing herself as one of the top names in women's wrestling. Towards the end of the 90s, injuries forced her to slow down from the fast-paced style she had become known for, but she continued to wrestle; albeit on a much more reduced schedule. She briefly appeared in Mexico for the Universal Wrestling Association, and her most notable matches in the US were for the Wrestling/CHIKARA, before retiring in 2017 in a special 30th anniversary show, where she wrestled a series of one minute time limit matches, before finally having a proper match with her handpicked successor, who beat her with her own finishing maneuver, ending one of the most legendary careers in Joshi.

Understandably, Toyota's trophy case is quite extensive: She was a four time WWWA World Single Champion, a one time IWA World Women's Champion as well as it's longest reigning champion, A Three time WWWA Tag Team champion, a four time winner of the Japan Grand Prix, and a five time winner of the Tag League The Best tournament. She has been awarded seven five star matches From The Wrestling Observer for her individual efforts and another seven for her work in tag teams, giving her a record setting fourteen, as well as two match of the year awards and was named most outstanding wrestler of 1995. She was inducted into the observer Hall Of Fame in 2002.