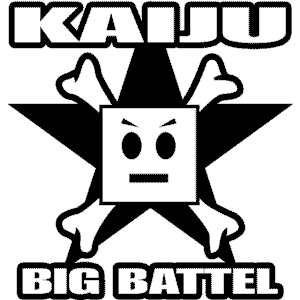 Kaiju Big Battel (spelling intentional) is a story of the constant "fighto" between good and evil, played out before live studio audiences.

Constant battels by giant batteling monsters threatened the safety and happiness of the Earth. To protect our way of life, the Kaiju Regulatory Committee, KRC, created the Big Battel, to contain the struggle between good and evil and protect the public. And to allow them to watch for a reasonable price. The KRC is led by a mysterious Commissioner, and its events are overseen by a to-scale referee, Referee Jingi. Ringside commentary is provided by Louden Noxious, who is exactly what his name suggests.

The faces in the battel include American Beetle, Los Plantanos (the plantain twins), Dusto Bunny, Robox the mighty cardboard robot, and Hero Intern. The organization's chief Heel is Dr. Cube, whose "posse" seeks to destroy civilization as we know it. His minions include The Grudyin and Hell Monkey (the Apes of Wrath), Silver Potato, Superdimensional Slug 1 (SDS-1), and Gomi-man, the radioactive monster formed from New Jersey's trash. A few rogues, like Team Space Bug (led by Uchu Chu) and Kung-Fu Chicken Noodle make trouble for everyone else.

Now, without the Kayfabe. Kaiju Big Battel is an affectionate parody of Professional Wrestling and Kaiju monster movies. Colorful characters in foam rubber suits square off in model cityscapes in venues like anime conventions and arthouse theaters. Established in 1996. A TV pilot for G4 was performed and shot, but not aired or picked up. Louden Noxious and The Beav hosted the short lived animated Action Blast! programming block on G4 in 2006.

As of 2013, there have been sweeping changes throughout the KBB. With newcomers, old friends and foes, and sweeping changes, the Big Battel shall be changed for the better..or the worse, all depending.

A common user of Japanese Media Tropes and Professional Wrestling tropes, with a wink, a nod, and a laugh each time.

The official site can be found here.