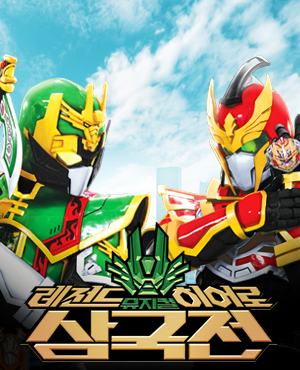 Legend Heroes is 2016 Korean Tokusatsu series. It combines Super Sentai mecha battles with the Henshin Hero tropes of Kamen Rider, all while theming itself after Romance of the Three Kingdoms.

People named after warriors of myth are handed Legend Changers and are told to bet their dream in the aptly named Dream Battle. Whoever should defeat the other one hundred warriors can have their wish fulfilled. Those who are defeated and have their Legend Changers destroyed lose their dream and memories of Dream Battle. Throughout the Dream Battle, Liu Bei and those close to him do their best to navigate the Dream Battle and protect the city as more and more Heroes appear to practically crop up daily. Meanwhile, a dark, grinning figure looms in the shadows with their own agenda...