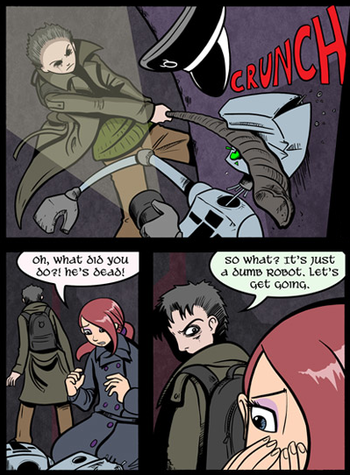 Note the uncharacteristic use of the pronoun "It".
Mr. Kornada: An A.I. was brought here this morning. Where is it?
Secretary: She is in Lab Three.
Mr. Kornada: A.I.s have numbers, not names.
— Freefall
Advertisement:

Authors and characters in Speculative Fiction have oft pondered whether robots, AI's, clones, and other human-like entities can become sapient, and if so, if they also carry a soul. Do Androids Dream?

Well, not in this universe.

For whatever reason, the author decides that in her setting the A.I.s, clones, or whatnot may be sentient

. They can fall anywhere on the Sliding Scale of Robot Intelligence — they may know a lot or have incredible computing power, but lack that final je ne sais quoi that separates the Empty Shell from a real boy. Even the godlike machine intellect is somehow lacking a crucial human component that gives its existence purpose and meaning. Typically, these settings have the placidly monotone ship's computer help the crew when asked, but never act on its own.

Then there are the people who just don't think they can't.

To them, it's "just a machine". Its only value is the monetary expense incurred in building, cloning, coding, or buying it. It has no rights, you can't even be accused of animal cruelty for beating it (at worst, of being wasteful or having poor taste), even when it's unique and has No Plans, No Prototype, No Backup. The humans will doubt or deny that they can Grow Beyond Their Programming and learn to feel, and if they can feel, then these feelings are ignored or treated as less valid than a human's smallest whimsy.

It should come as no surprise that these humans are keen on enslaving them, or if at war think nothing of killing them. Their destruction is never considered a moral question — just one of economics or simple survival. Oh, and you can expect these people to never use male or female pronouns to refer to these characters. They often consciously choose not to as a means to avoid humanizing them. Is it any wonder the robots, clones, etc. Turned Against Their Masters?

Even if they are right, you have to wonder just how psychologically healthy it is to mistreat something that is 100% human in the Uncanny Valley.

It can get pretty odd when the machines themselves claim this is the case, usually to justify being the one to make a Heroic Sacrifice. Such scenes usually invoke empathy for the robot, and lead the audience to empathise with them. Note that the trope has seldom been played straight since the earliest days of science fiction. If it is implied to be self aware there will at least be a lampshade on this trope.

Compare Not Even Human. Sub-Trope of What Measure Is a Non-Human?. Contrast Zombie Advocate. See also "It" Is Dehumanizing.