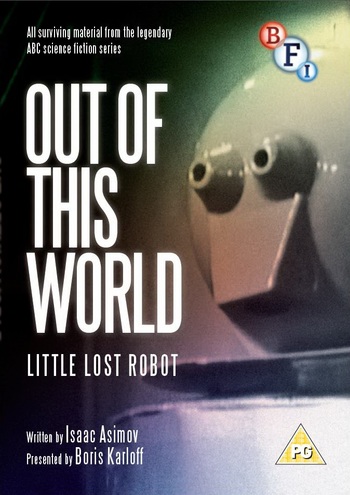 First airing on 30 June 1962, this British Series by Associated British Corporation is a Spin-Off from Armchair Theatre and hosted by Boris Karloff. He introduces each episode by sharing a small detail related to the play, one that won't give away spoilers about the work. The terminology "play" for the story that he hosts is a carry-over from Armchair Theatre, where it's a conceit of the show that you're watching a theatre performance on the telly. Sydney Newman and Irene Shubik are credited as producers for this ABC series, with many different directors and scriptwriters.

Shubik would later create Out of the Unknown for the BBC, which had a virtually identical premise.

Not to be mistaken for the 1987 series about a half-alien who can freeze/unfreeze time.

Out of this World contains examples of: