Recap / Star Trek: The Next Generation S6E9 "The Quality of Life" 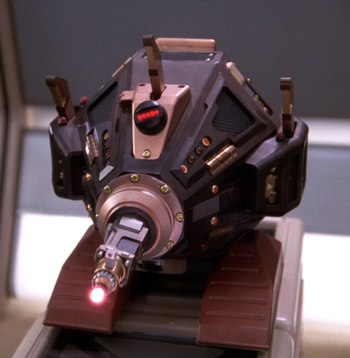 What measure is a flying snout robot?
Advertisement:

This episode opens with Geordi showing off his new beard at Poker Night. When Crusher starts negging the concept of beards, Geordi, Riker, and Worf opine that beards are symbols of strength, prompting Doctor Crusher to up the stakes of their next hand: if she wins, they all have to shave their beards, and if she loses, she’ll dye her hair. Much to her consternation, however, Picard interrupts the game to summon them all to the bridge.

They've arrived at Tyrus VIIa to oversee a new mining operation utilizing a particle-emitting satellite. The operation is running behind schedule, so the resident Dr. Farallon shows off the new tool she's developed, Exocomps. The adorable little flying robots fix things and learn how to perform better with each task. Data is particularly interested in how the machines use logic and experience to solve problems they have never seen before. Data supports Farallon's request to use the Exocomps to complete her work before the ship leaves.

As Data and Farrallon work, one of the Exocomps shuts itself down rather than go into an access tunnel. Moments later, an explosion occurs within the access tunnel. Farallon notes that Exocomps tend to have problems the longer they're in operation and need to have their memory wiped. Geordi jokes that it just wanted to avoid the explosion, but Data takes the idea seriously. He investigates further and finds that the burned-out interface circuitry that prevented the Exocomp from accepting commands has been repaired by the Exocomp’s own repair functions.

Data goes to Crusher and asks her to define life. She struggles to find a definition that applies to both organic life forms and Data himself, admitting that it's a question that humanity has yet to solve. With this information, Data returns to Farallon and tells her that she must stop using the Exocomps because he believes they are alive. Farallon rejects the notion, insisting that the Exocomps are too simple to be life forms, but Data counters that viruses are also simple and alive.

Picard takes Data's assertion seriously and agrees to a test an Exocomp's self-preservation instinct. Geordi sets up a scenario where an Exocomp is instructed to make repairs in an access tunnel where a simulated plasma cascade failure is about to occur. However, the Exocomp continues making its repairs well after the failure would have destroyed it. Farallon declares that the test has proven her correct. Picard assures Data that it was certainly worth testing, but he agrees with Farallon.

Data, however, continues repeating the test. Each time, it fails to abandon its task. Crusher visits Data to see how it’s going, and Data admits that he might have been too eager to find another artificial life form. However, his conversation with the doctor distracts him until the Exocomp returns. Data notices that the tool it has generated is not a tool needed for the task it was assigned but rather a tool meant to deactivate the false plasma cascade failure. He realizes that the Exocomp knew there was no real danger and intentionally shut off the false alarm.

When Picard personally goes to inspect the mining station, another incident occurs. This time it’s a power surge, and the entire station needs to be evacuated. Picard and La Forge stay behind to find a lost crewman but get stuck behind as the radiation from the power surge blocks further transport. Riker asks for solutions on his end. Farallon suggests detonating the Exocomps to shut off the plasma stream, but Data objects, revealing the results of his experiments and again insisting that the Exocomps are life forms. Riker decides the captain’s life is more important than Data's unproven theories and orders Farallon to proceed. They deactivate the Exocomps’ command functions to keep them from acting on their own and attempt to beam them into position, but Data locks out the transporter functions.

Riker is livid, but Data refuses to back down. He offers to beam to the station to shut down the plasma stream manually, but Riker can see that even an android would be killed by the radiation. Data says that he has the freedom to make that choice; the Exocomps don’t. Riker then offers to reconnect the Exocomps’ command function and give them a choice. Data accepts this as a fair course of action. Farallon programs the Exocomps, and they immediately alter the commands given to them. However, they are not refusing the commands but instead have decided upon their own solution. They beam into the mining station and begin siphoning energy out of the power core. This opens up a window to allow Picard and La Forge to beam out. The Enterprise tries to beam the Exocomps out as well but is unable to retrieve one of them. Geordi realizes that one of them had to stay behind to keep the window open for the others.

Obviously, Picard can’t recommend Farallon’s mining technique after all that went wrong, but she promises to continue her work until she fixes the problems. Data wishes her well. He then addresses the captain to explain why he put Picard’s life at risk for the Exocomps. He says that he wished to do for them what Picard had done for him when his own rights were threatened. Picard tells Data that he understands and calls it the most human decision he’s ever made.