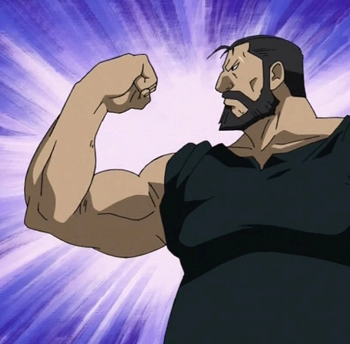 Facial hair is widely perceived as masculine and mature. Be it a well-groomed moustache or a lush and untrimmed beard, prominent facial hair on a male character is used to show them as a bona fide tough guy, a man's man, a veritable buffet of manliness.

The reason for this is that women and young boys usually don't grow facial hair, and the lack of it on a post-pubescent man can make them look "delicate" (see Pretty Boy) so its presence is associated with a gruff, hardened older guy. While a sufficiently muscled and square-jawed hunk can get away with being clean-shaven or sporting Perma-Stubble, he is just as likely to have a thick moustache and/or a full and gorgeous beard. Characters who lack facial hair can be considered less masculine, and the growth of facial hair on someone who was previously unable to grow one or was clean-shaven can be a visual indicator that the guy Took a Level in Badass.

Common "manly" types who tend to have facial hair are the Chick Magnet (who may be sporting a Clark Gable-style mustache), the Mighty Lumberjack, Nature Hero, or Hunter Trapper (in these cases a bushy beard shows their relation to and dominance over nature), The Strongman (who is usually associated with a handlebar moustache), and the Macho Latino sporting one of the Magnificent Moustaches of Mexico. Also often found in military settings, associated with Sergeant Rock, Colonel Badass, The Captain, Father Neptune, and the Ace Pilot. Sometimes the association becomes parodic, as in the case of Testosterone Poisoning types who also sport exaggerated facial hair.

Sister Trope to Carpet of Virility, which achieves the same effect with chest hair, and Lantern Jaw of Justice, the way to go if you want to look manly without a beard. Super-Trope to Beard of Barbarism (where long facial hair is used to mark someone as being from a violent warrior culture) and Seadog Beard (where a bushy beard is on an experienced seaman). Compare Girls with Moustaches, mustached or bearded women are usually presented as funny or disgusting since women should not be manly and should not have facial hair. And note that not all facial hair is manly — a Porn Stache might make people giggle instead, and a Wizard Beard serves more to make them look wise and old. Beard of Sorrow is also not manly, but rather a sign that a man has become depressed and given up on his grooming (though it could be worn by a Heartbroken Badass). A Beard of Evil is also unlikely to be manly, given its likelihood to be worn by an older, wimpy intellectual villain like a Mad Scientist or Evil Chancellor.

In real life, mustaches are considered more professional than beards and they were mandatory in certain services. In the southern parts of India, police officers are encouraged to grow a mustache or have mustaches as part of the uniform

because police officers with a mustache were believed to be more effective, more respected by the public, less intimidating, and better at interacting with the community. Mustaches and beards are also considered a sign of innate masculinity and virility in India.

From 1860 to 1916, it was mandatory for British soldiers to wear mustaches

and they would be arrested if they removed their facial hair. In Ancient Rome, beards were considered slovenly and a sign of living in squalor but were accepted as long as they were well-groomed and worn by someone in a position of authority. In certain countries note  The Philippines, South Korea, Turkey, and Brazil to name a few. , unkempt beards are considered improper and unprofessional while serving in the military and soldiers will have to be clean-shaven because the organization has to present discipline, hygiene, and uniformity. However, mustaches are only acceptable in certain countries as long as they are neatly trimmed and well-groomed during the soldier's service.

Beards have also fallen in and out of fashion throughout history. The elaborate military whiskers of the Victorian and Edwardian Eras fell quickly out of fashion during World War One because they interfered with the fit of gas masks (except for the toothbrush mustache as it would fit beneath the mask, but it was Ruined FOREVER by one guy). They were out in the 20th century thanks to the rise of widely-available shaving equipment making it easy to get rid of facial hair but made a comeback in the 21st.

Note: it is not enough for a male character to simply have a moustache, sideburns, or beard. The work must associate the facial hair with masculinity in some way.