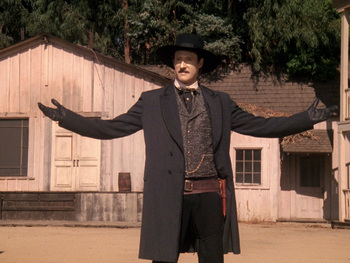 "If you will forgive my human metaphor, Lieutenant, it appears this town does not have the capacity for both of our respective attendances."
Advertisement:

The Enterprise has two days of downtime, so the crew are finding different ways to pass the time. Picard is practicing his recorder, Crusher is directing a play, Geordi is interfacing the ship's systems through Data's brain, and Worf wants to overhaul the ship's defenses. Picard urges Worf to relax a little instead, so the disappointed security chief returns to his quarters, where Alexander is waiting to rope him into a holodeck adventure.

Work and Alexander dress up as a Wild West sheriff and deputy and arrive in the town of Deadwood to bring the bad guy, Eli Hollander, to justice. Worf promptly pummels Eli, but Alexander stops the program and raises the difficulty so it will be a challenge. Worf tries again and gets into a brawl with Eli's goons. He's rescued by Troi posing as mysterious drifter, having been recruited by Alexander because she loves westerns. The trio arrest Eli. Meanwhile, a power surge in Data's positronic brain causes him and Geordi to discontinue their tests. As they walk away, Data twirls his tricorder like a pistol.

Worf, Troi and Alexander are holding Eli in a cell awaiting the arrival of a judge, when Alexander is kidnapped. Around the ship, the computer starts experiencing errors. The script for the play that Crusher is directing gets replaced by Data's poetry. The music that Picard was accompanying gets replaced by Anton Dvorak's The Slavonic Dance, which Data's been analyzing. Food replicators produce nothing but Spot's cat food. Further, Data is starting to act like a Wild West character. Geordi sets to work restoring the damage.

In the Holodeck, Eli's father Frank has kidnapped Alexander, and he looks just like Data. He demands the return of Eli in return for Alexander. It turns out that he has all of Data's physical abilities. When Worf escapes, Frank and his men shoot him, revealing that the security measures are no longer functioning. Worf returns to Troi, and they realize that they're stuck in the simulation. They'll have to finish the story by somehow defeating a superhuman gunslinger.

Worf negotiates a Prisoner Exchange with Frank, but Troi warns him that the villain will always backstab the hero. Further alarming is the fact that more and more characters are turning into Datas. Worf recruits the owner of the local saloon, Annie, to bring him some supplies. Annie is programmed to be his mistress (a likely addition of Lieutenant Barclay, who co-authored the adventure), forcing Worf to endure her advances in return for the favor. Worf uses the items to rig a temporary forcefield, which he wears to the prisoner exchange.

Frank arrives with a full compliment of Data henchmen, who promptly open fire as soon as the exchange is made. The bullets bounce harmlessly off the forcefield, but it burns out after a few seconds. Troi emerges from hiding to hold the henchmen at gunpoint. Frank is out of ammo, but the last of his henchmen tosses him a loaded gun. Worf beats him to the draw and shoots the gun out of his hand. Defeated, Frank gives up, and Worf tells him and his men to leave town and never return.

The day is saved. Troi, Worf and Alexander gather and await the end of the program, but nothing happens. There's one last thing that needs to happen. They return to the saloon, where a Data version of Annie runs down the stairs and embraces Worf, who winces until the program fades away. Back in their quarters, Alexander guesses that Worf won't want to return to the "Ancient West" again, but Worf states that the town of Deadwood will need the protection of a good sheriff and his deputy. The security chief steals away and admires himself in his cowboy hat, practicing his quick-draw and smiling approvingly. The ship flies off into a setting sun.