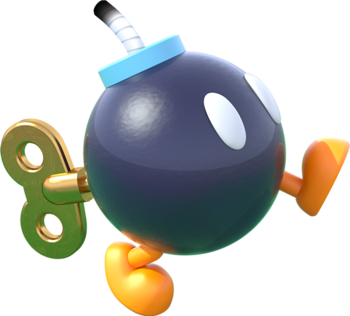 Warning: Explosive temper.
Ardam: I wonder how a species that explodes at the first sign of trouble managed to not make itself extinct.
Drecker: If you were a predator, would you go after Bombats?
Ardam: Good point.
— Adventurers!, from this comic

An Action Bomb is anybody or anything which tends to use "Blowing Myself Up" as a combat technique. Though it kills the user, this is actually a logical tactic for those willing to expend their lives; the more accurate an explosive device is, the more likely it is to accomplish its goal, and how much closer do you get than right next to the target?

A common variation is the enemy that won't commit suicide (other than trying to attack you in the first place), but will detonate violently upon death or defeat (see Last Ditch Move and Dead Man's Switch).

If the user is expendable enough, he'll die. If the user is special or a hero, expect to see him either have it as a Dangerous Forbidden Technique that will one day get him Killed Off for Real, or resurrected and re-deployed ad infinitum.

See also Having a Blast, Mad Bomber, Taking You with Me and Why Am I Ticking?. Compare Suicide Attack, which involves killing oneself to take out a target but doesn't necessarily involve a violent explosion. May be a Desperation Attack if the user only uses it if their foe is already beating them and they're going to die anyways.