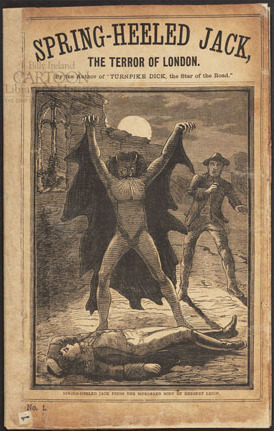 Spring-Heeled Jack (sometimes spelt as Spring Heeled, Spring-Heel or Spring Heel'd) is a famous Boogieman from British folklore dubbed "the Terror of London", who is most renowned for and named after its reported ability to jump incredible heights and distances with absolute ease.

The first reported sighting come from 1837 (although reports of similar phantoms date back as early as 1803) when Mary Stevens, a serving girl walking home through the streets of London one night, was attacked by a horrific specter that she claimed jumped out of a dark alley, forcefully kissed her and ripped her clothes, before scarpering when her screams attracted the neighborhood's attention. The next day a short way away, a figure jumped in front of a passing coach, causing its driver to lose control and crash, with the witnesses claiming that entity then casually escaped by jumping over a nine-foot fence whilst emitting a high pitched laugh.

The attacker was dubbed Spring-Heeled Jack by the newspapers and the legend was born. Since then there have been multiple sightings (the last official being in 1907, but some claim as recently as 2008). Whilst most commonly seen in London, reports of Spring-Heel Jack range through Britain including Middleborough, Liverpool and Lincolnshire, and even as far north as parts of Scotland.

Descriptions differ, but the spectre is generally described as being a tall, thin figure in a long black cloak, with clawed hands and eyes that "resemble red balls of fire". In some cases he's described as seeming gentlemanly from a distance, but possessing a devil-like face. In others he's described as wearing a helmet and an otter-skin cloak. Some versions go as far as to portray him as possessing demonic traits or being clearly inhuman. Many versions also depict him capable of breathing blue or white flames. Whilst generally silent, some reports described Jack as being able to speak English.

Modern theories on who or what Jack actually was vary, from a pure Urban Legend with no backing in reality, to a malicious prankster using some kind of stage equipment to pull off apparently supernatural feats (possibly also with some press or rumour-driven exaggeration), to claims that he was some kind of cryptid, supernatural entity, or alien.

Due to his hideous appearance and unique attributes, Spring-Heeled Jack became a highly popular figure in fiction, often being the subject of Victorian Penny Dreadful's. Whilst his literary status has deteriorated since the turn of the 19th century, Spring-Heeled Jack remains a prominent figure in the media.

Whilst traditionally a villainous figure, as early as within twenty years of the legend's appearance more complex or sympathetic depictions of Jack appeared.

By contrast, some versions go in the opposite direction. Whilst historically there are no reports or legends of Spring-Heeled Jack being responsible for killing anyone, it's not uncommon for adaptations to present him as murderous (and potentially even linked to Victorian London's other infamous Jack).

Not to be confused with Stingy Jack, a similarly named but very different Spectre from Irish Folklore.