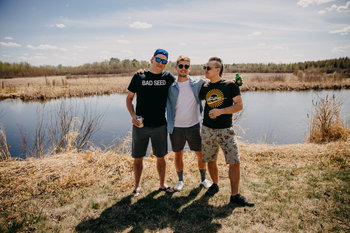 The Priestner brothers, and Lubo.
Advertisement:

Rare Americans is a Punk Rock band from Canada. The lineup currently consists of the Canadain Priestner brothers and the Slovakian Lubo. They're particularly notable for how their songs are promoted. They chose to promote their songs as ads on YouTube as full music videos. Their website can be found here,