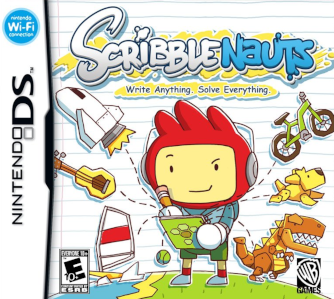 Make anything. Yes, anything.
Advertisement:

Scribblenauts is a series of physics-based puzzle-platformer games developed by 5th Cell Interactive (previously known for Lock's Quest and Drawn to Life) and published by Warner Bros. Interactive Entertainment. You play as Maxwell, a young boy who wants to collect the Starites, shiny star-shaped things. There's one Starite per level, and they are either out in the open or are hidden until certain tasks are completed.

While Scribblenauts has a simple premise, there's more to it than is immediately obvious. Using a magical notepad, you can write and summon almost anything in the dictionary (and plenty outside of it) to the game world to solve puzzles, from elephants to thunder clouds to zombies. You can then move and interact with everything you make to solve the puzzles. This system allows for a massive amount of freedom in solving every stage, to the point where revisited levels challenge you to beat them three times in a row while not being allowed to re-use any objects made in the last attempt.

The first game was made for the Nintendo DS, like many of 5th Cell's previous titles. Prior to its September 2009 release, the game received mild hype from various outlets from its extremely ambitious premise, but only really took off at that year's E3 when game journalists finally got to play it for themselves. In an unprecedented occurrence for a portable title, three major game reporting outlets declared the hand-held Scribblenauts to be the game of the show. Reviews of the full game were still generally positive, aside from criticism of the control scheme.

A sequel, Super Scribblenauts, released in 2010 on the DS. The dictionary now includes adjectives to modify objects (meaning you can create a literal Ninja Pirate Zombie Robot), new levels (there are fewer this time around, but they're longer and more puzzle-based), and a whole lot of improvements to the controls, camera, and physics engine. Both Super and the original were re-released as Scribblenauts Collection on one DS cartridge, backporting quality-of-life features into the first game.

A Mission-Pack Sequel mobile game, Scribblenauts Remix, was released for iOS in 2011 and Android in 2012. It uses the adjectives system of Super Scribblenauts, and contains favorite levels from the first two games, as well as levels exclusive to it.

The third game of the series, Scribblenauts Unlimited (2012) brings the series to the Wii U, Nintendo 3DS, and Steam. The Wii U and PC versions include an object editor, allowing players to create new objects using pieces of other ones. This game alters the formula from the previous ones by having each level be a miniature open world with several small quests and one or two big ones to solve. It also added a simple plot, explaining why Maxwell has his notebook (he got it from his adventurer parents) and why he goes around collecting Starites (he abused the notebook's power and had a curse cast on his sister Lily that turned her to stone, and it can only be reversed by collecting Starites which appear by doing good deeds). A mobile version was released in 2015 and a Nintendo Switch version in 2019.

A third sequel, Scribblenauts Unmasked, was released in 2013, and was a crossover with DC Comics. It even has a comic book series based on it. Plans for another game titled Scribblenauts: Fighting Words were scrapped in 2016 after a major layoff at 5th Cell, and development of future titles were eventually handed over to another company: Shiver Entertainment.

In 2018, a spinoff titled Scribblenauts Showdown was released on Xbox One, PlayStation 4 and Nintendo Switch, developed by Shiver and not by 5th Cell. It is a multiplayer-centric party game, with over 25 minigames based on the players outdoing each other's efforts to find the best word or object to fit a given task.