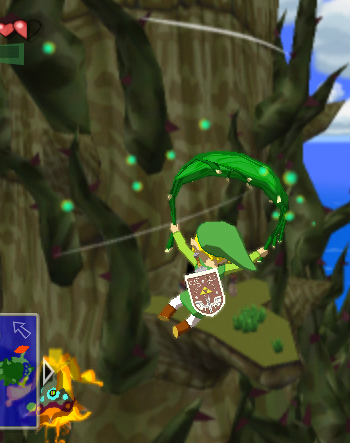 Forms of fictional media have physics which differ from Real Life. As such, it's not uncommon for there to be places where the main character must cross gaps which can barely be surpassed with a well-timed jump.
Advertisement:

However, sometimes a character's jumping ability isn't great enough to let them cross a gap. Luckily, there just happens to be gusts of strong wind, of whatever nature, coming straight up through the chasm or from behind the ledge. As our hero jumps, the wind pushes with enough force to let them cross the otherwise-uncrossable gap. And so we have Air-Aided Acrobatics.

Almost guaranteed to show up in a Gusty Glade. Compare Rocket Jump, in which explosions aid the jump instead of wind.