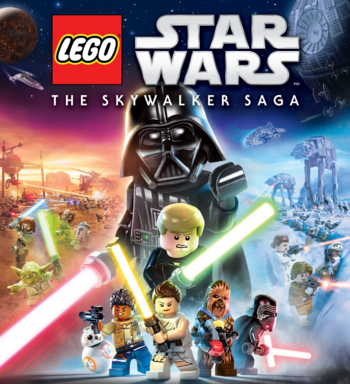 The galaxy is yours.
The original and most prolific series in the LEGO Adaptation Game franchise.
Advertisement:

A long time ago (1999 to be exact), in a galaxy (not so) far far away, there was a toy company called LEGO, and Star Wars was the first licensed theme that they got the rights to make. These were wildly successful, and alongside BIONICLE, helped the company become more influential than anyone could have possibly imagined. Eventually, a company known as Traveller's Tales decided to make a tie-in game based on these toys.

Thus, in 2005, they released LEGO Star Wars: The Video Game. The game (which was released just in time for the release of Revenge of the Sith in theaters) covered the Prequel Trilogy that consists of The Phantom Menace, Attack of the Clones and Revenge of the Sith. The game was so successful, played by many children and Star Wars fans, that LEGO Star Wars II: The Original Trilogy was quickly greenlit and released in 2006. In 2007, the games were combined into a Compilation Rerelease, known as LEGO Star Wars: The Complete Saga, which fixed issues from the first two games and sweetened the deal by adding in an abundance of new content as well.

With the Star Wars saga complete (at that point in time), TT Games shifted their focus to other IP to adapt, such as LEGO Indiana Jones and LEGO Harry Potter. Nonetheless, they returned to the Galaxy Far, Far Away in 2011 with a new title — LEGO Star Wars III: The Clone Wars — which adapted the first two seasons of the show. While no sequel covering subsequent episodes was made, the Disney purchase happened a year after the game was released, which led to some concerns that this would be it for the series, since Disney agreed to allow Electronic Arts to exclusively create new Star Wars games for a multi-year commitment. Thankfully, the new deal did not invalidate the existing agreement with TT Games, and they were then allowed to create LEGO Star Wars: The Force Awakens, which released in 2016, which bridges the gap between Return of the Jedi and The Force Awakens with additional content. No follow-ups were made for the two subsequent episodes in the trilogy, and by E3 2019, it became clear as to why that was: they were thinking bigger. Much bigger.

LEGO Star Wars: The Skywalker Saga covers all nine films in the Original, Prequel, and Sequel Trilogies, and was released on April 5, 2022. Said game is not just The Complete Saga and The Force Awakens bundled with the missing two episodes; instead, it's a completely new experience with all-new levels and more complex puzzle design and combat systems. The Skywalker Saga is by far the biggest LEGO title of its kind in terms of scope and scale, which includes a cast of almost 400 playable characters and vehicles, and features open-world elements on dozens of planets and spaceships that previous games only scratched the surface of. In addition, Downloadable Content made up of character packs based on Rogue One, Solo, The Mandalorian, and The Bad Batch was released, along with packs tied to other Star Wars characters. Another wave of DLC adds characters from The Clone Wars, Rebels, The Book of Boba Fett, Obi-Wan Kenobi, Summer Vacation, and Andor.

For a more concise list of entries, the LEGO Star Wars games consist of: