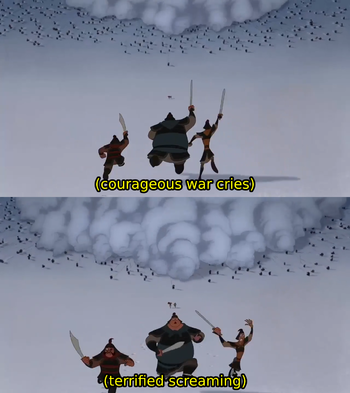 When the going gets tough, the tough get going!

Someone shouts an order or entreaty but is suddenly forced to change their stance and start chanting the opposite. Usually a Comedy Trope, but can also be presented as a valid military tactic.

Commonly spoken by a Small Name, Big Ego. The change of circumstance often prompts an Oh, Crap! expression. See also Verbal Backspace, On Second Thought. Tactical Withdrawal is a non-comedic variant. Can be an element of Hit-and-Run Tactics or a Defensive Feint Trap. Be Careful What You Wish For often involves this, though more long-term. Compare Punch! Punch! Punch! Uh Oh.... Contrast Attack! Attack! Attack!. May be a comedic Underequipped Charge. If the character Attack-Attacks anyway, they're probably a Boisterous Weakling.

The First Assault on Molossia

When Kevin Baugh pulls a gun, everyone quickly turns back and screams.

The First Assault on Molossia

When Kevin Baugh pulls a gun, everyone quickly turns back and screams.