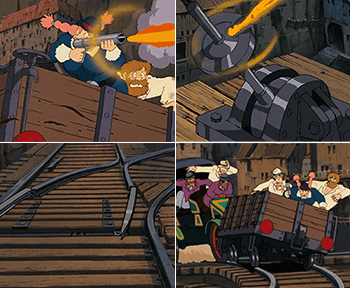 Keeps the story from going off the rails.
Advertisement:

If you're riding a Runaway Train, Rollercoaster Mine truck, or another vehicle on rails and you have to flip the railroad switch to redirect its course. What can you do?

Characters in possession of a ranged weapon and with Improbable Aiming Skills are likely to shoot the lever from afar. Alternatively, one could just throw a large object at the switch to get the job done. Or, if the switch is close enough, you could just smack it as it passes by.

In fiction, these solutions almost always work. In Real Life, however, things are a bit more complicated. Shooting a railroad switch might just break it instead of flipping it.

See Train Stopping when instead of rerouting a moving train somebody is capable of stopping it in its tracks. Compare Cut the Fuse.