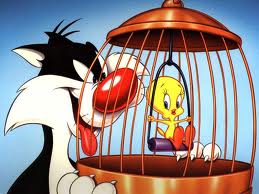 Sylvester and Tweety, in an all too typical scene.
"I tawt I taw a puddy tat."
Advertisement:

Sylvester the Cat and Tweety Bird, created by Friz Freleng and Bob Clampett respectively, are two of the most well known characters in the Looney Tunes and Merrie Melodies stable. They had dozens of cartoons together, with Tweety encountering Sylvester at least 48 times during their heyday.

Obviously, these shorts have achieved much popularity, second only to the big three stars of Looney Tunes. The final version of the classic series The Bugs Bunny Show even gave Tweety Bird top billing along with Bugs in "The Bugs Bunny and Tweety Show". They were even popular enough to get their own TV Spin-Off, The Sylvester and Tweety Mysteries. Tweety also recieved his own Direct to Video movie, Tweety's High Flying Adventure.

While Tweety was almost always seen opposite Sylvester, Sylvester sometimes had other opponents, like Hippety Hopper the kangaroo or Speedy Gonzales. He also has had a son on occasion, named Sylvester, Junior. Still other times, Sylvester was occasionally seen as the pet of Porky Pig.