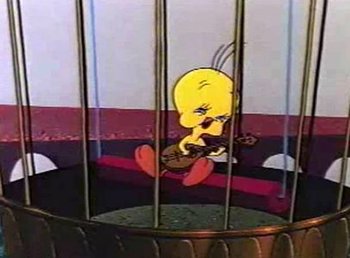 "Santa Lucia" in Italian.
Venice, anyone?

A Pizza Tweety Pie is a 1958 Looney Tunes cartoon with Tweety And Sylvester. It was directed by Friz Freleng.

Granny and Tweety have just set up at their hotel Venice, Italy — where the canary is spooked at the sight of all the poles around the canal, thinking that there's so many barber shops in the area undone by a broken dam.

Settling in quickly, Tweety is just blissfully singing away when Sylvester, from a balcony in an opposite building, notices him and decides that Tweety would be a perfect sand-a-wich-a.

So, clearly without watching where he’s going, Sylvester takes both halves of a submarine roll and goes dashing toward his prey. Thereafter, things go as well as they usually do for the puddy tat. Among a canoe that needed to be unanchored, an elevator ride, an inflatable raft, a balloon powered by a table fan, and a fishing rod which ends up snaring a speedboat instead, the ending is usually (but not always) a wet one.