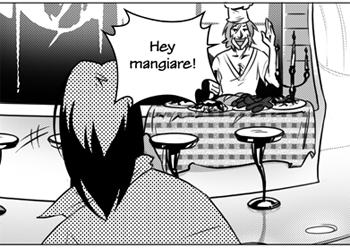 For extra flavor to your meal, add Italian.
Mr. Parker: 'Fra-gi-le'... it must be Italian!
Mrs. Parker: I think that says 'fragile', honey.
— A Christmas Story note By the way, the word means the same thing in both languages, and it has the same etymology: from the Latin fragilis
Advertisement:

When in Hollywood Italy, speak as the Italians do. Or, at least, in a fair approximation.

A work set in Italy, or featuring Italian characters, will often insert Italian words or phrases in the dialogue, for "flavor". Italian is also a favorite language of opera singers and classical musicians and the official language of The Mafia. And, supposedly, everything sounds more romantic in Italian. Or tastier.

Culinary and musical terms are often used, because that's what many people associate Italian with. This is Truth in Television, somewhat, as many of these terms have been exported from Italian and don't have an English equivalent; "mamma mia!" is often heard, even though it's hardly the only Italian exclamation available.

Naturally, even though the people speaking Italian are supposedly Italian themselves, they will never, never pronounce certain words correctly. For instance, the word capisci is always pronounced "kah-peesh" instead of "kah-peesh-ee"; however, this is a bit of truth in television as dropping final syllables like this is (sometimes) the easiest marker of southern Italian dialects and accent; because most of the immigrants to America came from either Naples or Sicily, these accents tend to predominate in American media. Also, at the turn of the century when most of the Italians came to America, very few of them spoke "Italian" or - to be more specific - the language based on the Tuscan dialect that one learns in school, but rather they spoke only their local dialects, which could be as different from each other and standard Italian as Italian is from Spanish (not to mention the ones who spoke Greek or Albanian).

Don't expect the grammar to be correct, either. Verb-object agreement is a source of trouble, and - unlike English - Italian adjectives are gendered, which is often ignored. For example, "bravo" should be "brava" if referring to a woman. A really lazy way of doing it is having the characters simply speak English, but with a heavy accent and with unstressed "a's" tacked onto the end of random words. ("Give-a the ugly kid a plate of the red-a crap!")

Italy has many different accents, which can vary wildly between regions. The ones that are most often heard in the media are those typical of Southern Italy, especially Naples or Sicily (the latter is commonly associated with the Mafia). There are also many regional dialects, some of which are different languages from Italian itself. As you might expect (given the parallel example of British versus American English) spoken Italian in North America has diverged from the European version to the point where linguists consider it a separate dialect of its own. See Everybody Loves Raymond below for examples.

How Bond introduces himself to the guard outside the Spectre meeting? "Io sono Topolino." Italian speakers will get the joke right away. For those who don't speak Italian, the payoff isn't until Blofeld outs Bond, the same guard is the one who comes to remove Bond, and addresses him by the English translation of the name he gave when he entered the meeting: "Ciao, Mickey Mouse!"

How Bond introduces himself to the guard outside the Spectre meeting? "Io sono Topolino." Italian speakers will get the joke right away. For those who don't speak Italian, the payoff isn't until Blofeld outs Bond, the same guard is the one who comes to remove Bond, and addresses him by the English translation of the name he gave when he entered the meeting: "Ciao, Mickey Mouse!"