Anime / Pokémon: The Power of Us 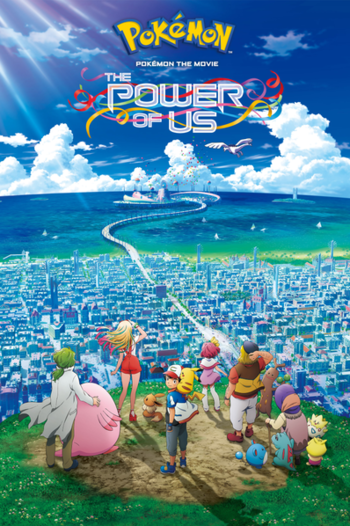 This time, every one of us can make all the difference.
Advertisement:

Pokémon: The Power of Us, known in Japan as Pocket Monsters: Everyone's Story, is the 21st Pokémon: The Series movie by OLM Incorporated, the first to be directed by Tetsuo Yajima, and the first to be written by Shuji Umehara and Aya Takaha. It was released on July 13, 2018.

While it takes place in the same universe as the previous movie and features Lugia like Pokémon 2000 did, the story is vastly different. It also features the third mythical Pokémon from Generation VII, Zeraora.

Once a year, a "wind festival" is held in Fula City, the city where people live together with the wind. On the final day of the festival, the legendary Pokémon Lugia will appear and give the people the blessed wind, a promise said to date back to the distant past. Risa, the highschooler and Pokémon rookie. Callahan, the braggart that just can't stop telling tall tales. Toren, the timid researcher that lacks confidence. Harriet, the old eccentric that hates Pokémon. Margo, the mysterious little girl that hangs around in the forest all by herself.

While they're participating in the festival, Ash and Pikachu meet these five companions by pure coincidence. Each of them has their own worries on their mind, and are unable to take a step forward together with their partner Pokémon, but when they meet each other, the cogs of destiny start turning...

Will the promise with Lugia be kept? And just what is the true identity of the mythical Pokémon Zeraora? Everyone's friendship, both people's and Pokémon's, will now cause a miracle to occur.

It was the final Pokémon film to feature Unshō Ishizuka as the narrator before he died less than one month after its release.

Followed by Mewtwo Strikes Back—Evolution (though that film does not take place in this continuity) and then by Pokémon: Secrets of the Jungle, which serves as a sequel set in the same continuity.

The Power of Us provides examples of: