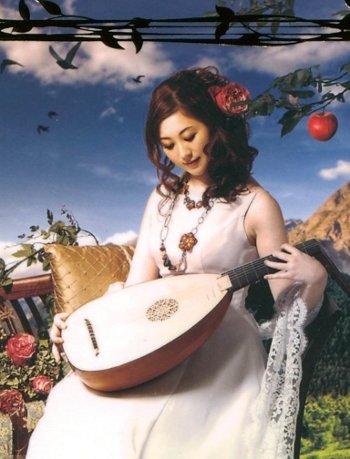 Welcome to her world.
Advertisement:

Akiko Shikata (志方 あきこ, born on January 7th - age unknown) is a bit of a UFO in the Japanese musical landscape. At first she started as a music composer by creating an independent label called Vagrancy

, but quickly picked up to singing, developing a style that draws from Japanese traditional music, Celtic music, Middle-Eastern music, classical music, rock, religious chanting, and whatever the hell she feels like. And even occasionally in regular Japanese Pop Music. She also released a lot of purely instrumental tracks and albums, often using a music box as her instrument of choice. But what makes her most well known is her contribution to a lot of video game, anime and Visual Novel musics, most famously EXA_PICO, Umineko: When They Cry, the Tales of Symphonia OVAs and Yona of the Dawn. In 2014, she also composed her first (and so far only) soundtrack for an anime, Cross Ange.

Another particularity is her voice; or more accurately, her voices. Not only does she have a remarkable voice range, she can adapt her voice timbre to a variety of moods, and is also known for using multiple parallel voice tracks, creating one-woman choruses or "dialogues" in the songs. Her lyrics − or those of people who write for her − often revolve around the beauty and power of nature, the celebration of life, and mystical tales.

As you can see below, she's an extremely prolific composer who routinely releases two projects a year. Marathoning her discography will keep you busy for a while.