Film / The Master of Disguise 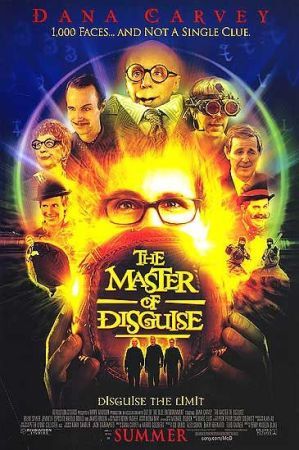 A 2002 comedy film starring Dana Carvey as Pistachio Disguisey, a bumbling Italian American waiter working at his father's restaurant. He has a bad habit of mimicking people unintentionally. His mother and father are kidnapped one night, by mysterious bad guys. So along comes his grandfather, who reveals that the whole paternal family line are natural masters of disguise who utilise a mysterious transformative magic called 'Energico.' His father never told him, because he didn't want his son to live a life full of dangerous enemies. But to get his father back, he must train in the art of subterfuge, learn the Disguisey martial art (consisting of slaps and blocks to humiliate your opponent), and learn to use the tools of the trade, found in his father's secret lair (behind an incredibly elaborate bookshelf in the attic).
Advertisement:

Oh, and he needs to hire a sidekick, who must be an attractive woman, preferably one with a nice, big bottom. So Pistachio's young friend Barney sends his unemployed mother, Jennifer Baker (played by Jennifer Esposito), for an interview and she gets the job (despite her obvious handicap of a bottom measurement of only 34 inches). So Pistachio and Jennifer hunt down his father's old nemesis, Devlin Bowman (played by Brent Spiner), and his new collection of priceless artifacts. Along the way, Pistachio learns to see past Jennifer's tragic lack of bottom-fat and love her, and she learns to love him and his family's complete and total insanity.

There are three basic plot threads: