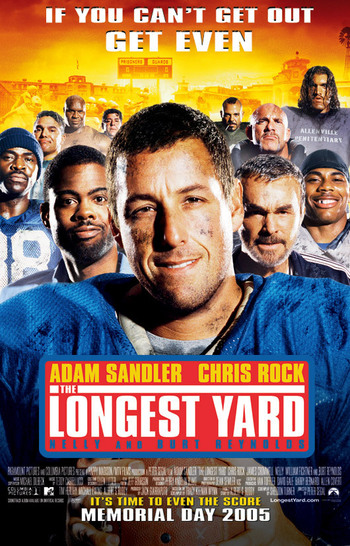 The Longest Yard is a 1974 movie starring Burt Reynolds, that was later remade in 2005 starring Adam Sandler. It combines the two things men care the most about: prisons and football.

Former NFL quarterback Paul "Wrecking" Crewe, who had been kicked out of football for shaving points off a game, finds himself on the wrong side of the law and is sent to a state penitentiary (Citrus State Prison in the original film, Allenville in the remake). The prison is known for having a semi-pro football team made up entirely of prison guards, but their team has fallen on hard times. The warden (Eddie Albert in the original and James Cromwell in the remake) wants Crewe to help turn things around, by assembling a team made up of fellow inmates to serve as a tune-up game for the guards.

However, this game becomes Serious Business for the convicts, who are seeing this as an opportunity to get back at the guards for all the abuse they've been getting over the years. With a former Heisman trophy winner (played by Reynolds in the remake) as the team's coach and a connection for sports equipment from the outside (played by Chris Rock in the remake), the "Mean Machine", as they come to be called, end up making a game out of it.

There is a British remake called Mean Machine, starring Vinnie Jones and Jason Statham in which they play the other type of football. It's notable in that it's one of Statham's few non-action roles and one where he plays an outright lunatic rather than his usual strong and silent characters.

The remake contains examples of: