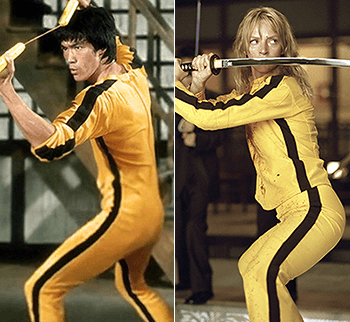 Bruce Lee and The Bride
Advertisement:

Often a character in a work dresses in an outfit practically identical to an outfit worn by another character or Real Life person, as a kind of Cosplay on the character's part, and a Shout-Out on the part of the costumer, designer, and/or artist.

The Whole Costume Reference is when you take the cosplay part out. The character is just wearing that outfit. There is no indication or clue within the work that this character is dressing as that other person. Also:

This can include live-action works, when the costume actually is the costume worn in an earlier work, as a form of Prop Recycling. Many low budget works do this. But again, there has to be no mention or clue of the work it was reused from.

Contrast Dresses the Same (in that wearing the same outfit is seen as bad).