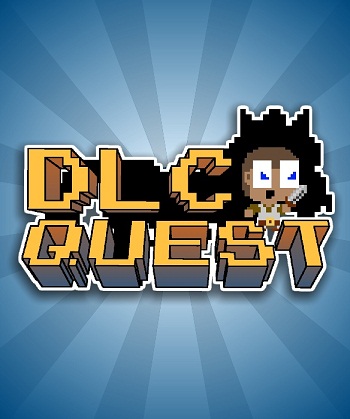 DLC Quest is a satirical 2012 Indie Game for PC, Apple Macintosh, and Xbox LIVE Arcade that takes Downloadable Content to its logical extreme. In this game, everything needs to be purchased. Including things like "Pause" and "Walk left".

Naturally, in keeping with the parody of shameless consumerism in modern video games, there is a Mission-Pack Sequel: Live Freemium or Die, which sends Player on an all-new quest to collect coins and spend them on even more DLC (oh, and save some villagers from a monster or something).

A sequel of sorts was released in 2017 that parodies shameless consumerism even further: Loot Box Quest.