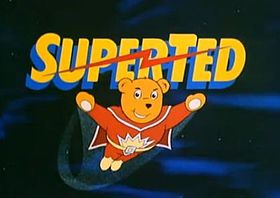 "This is a story about an ordinary teddy bear. When he was made, they found something wrong with him, and threw him away like a piece of rubbish—into an old dark storeroom. Then, from Outer Space—a Spotty Man brought him to life with his Cosmic Dust! He took him to a magic cloud, where Mother Nature gave him special powers! That bear became... SuperTed!"
— The series' Opening Narration
Advertisement:

SuperTed (1982-1986, 1989-1990) was a Welsh animated series that is every bit as bonkers as the opening narration would have you believe. Every week, SuperTed, with the Spotty Man (Jon Pertwee) as his sidekick, would save the world from SuperTed's arch nemesis, an evil cowboy named Texas Pete who does rope tricks and nothing else, and his henchmen, a strong but moronic man named Bulk and a talking gay skeleton named, um, Skeleton.

An American version was made by Hanna-Barbera as part of their Funtastic World of Hanna-Barbera block which also featured Fantastic Max, another show from creator Mike Young.