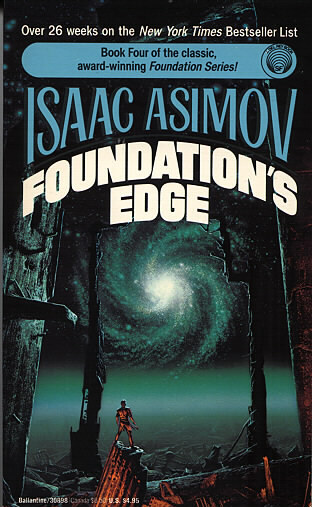 It is now four hundred and ninety-eight years after the First Foundation had come into existence. It is at the peak of its strength, but one man does not accept appearances -
—"Prologue"
Advertisement:

First published in 1982 by Isaac Asimov, this is the first Foundation Series story written as a novel, and Dr Asimov's first Foundation story in thirty years, finally publishing a fourth book. Foundation's Edge won that year's Hugo Award for Best Novel, and the Locus Award for Best SF Novel. The story is a Distant Sequel to the events of "Search by the Foundation", taking place over one hundred years later.

The novel begins just after the government on Terminus has seen Hari Seldon's recording in the Time Vault, congratulating the Foundation for choosing to remain on the edge of the galaxy instead of moving the government elsewhere. Golan Trevize, recently-elected Councilman, believes that this is proof that the Second Foundation (which had been universally thought to be extinct due to the events of "Search by the Foundation") still exists and is manipulating them behind the scenes. He quickly finds himself imprisoned and Mayor Harla Branno explains why; of course the Second foundation still exists, and publicly admitting it will only cause those psychic chessmasters to remove this knowledge from the government. Trevize agrees to a long-term mission to find the origin of humanity as a cover for his search for the mysterious mentalics.

Trevize leaves Terminus, accompanied by Janov Pelorat, an expert on Earth/Gaia/Alpha and other mythological stories of humanity's homeworld. Secretly following them is Munn Li Compor, who is working for Gendibal, of the Second Foundation, and Mayor Branno. At the same time, the Second Foundation has discovered that a secret organization, which they dub the "Anti-Mules", who are themselves manipulating things to conform to the Seldon Plan. As an unknown factor in the galaxy, they are automatically a threat to the Seldon Plan, and Stor Gendibal heads out to track Trevize and discover who has been pulling their strings.

This story is followed by Foundation and Earth.