Inertia Is a Cruel Mistress 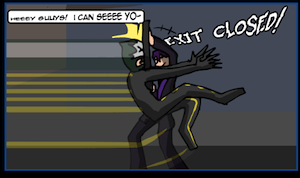 Have you ever stopped so suddenly, you made an Unsound Effect?
"Momentum, a function of mass and velocity, is conserved between portals. In layman's terms: speedy thing goes in, speedy thing comes out."
— GLaDOS, Portal
Advertisement:

Once a character enters teleportation, or starts a set of movements, he can't change destination or direction of movement at all.

This is the most oft-cited weakness given to an enemy with Teleportation or Super Speed if the plot requires a not-so-powered character to beat them. All an underpowered character has to do is figure this out, and then intercept them. Heaven forbid the opponent has the Required Secondary Powers needed to see it coming (ergo, Super Reflexes) and maneuver out of the way, is a Nigh Invulnerable Lightning Bruiser who can just barrel through the obstacle, has a Tele-Frag effect that will just destroy the offending obstacle, or worse, breaks the Magic A Is Magic A by not being subject to this problem...

A key aspect of Deadly Dodging, Wronski Feint, and defeating most Bullfight Bosses. A key part of considerations of Jump Physics in videogames. Compare Too Fast to Stop and Watch Out for That Tree!. Not to be confused with Gravity Is a Harsh Mistress.