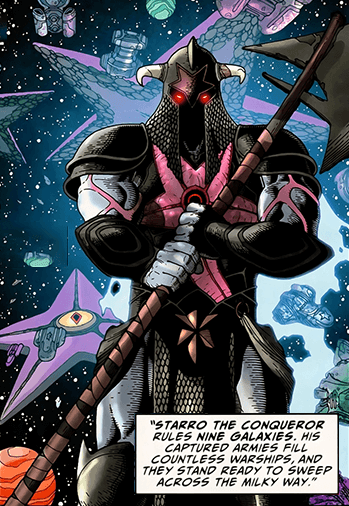 "All were forced to submit to the Star Conqueror's will."
"Choirs of daemons howl in salute as they sense his flagship exiting from warpspace at the edge of the system. Chains of cities across the surface of the planet are set ablaze in welcome as his battle barge slides into orbit. Thousands of slaves are sacrificed in celebration as he sets foot upon the surface, the very earth beneath him soaked in the blood of his victims."
— Bloodquest, Warhammer 40,000
Advertisement:

Generally below the Dimension Lord but above The Emperor and the Evil Overlord lies this character.

Sometimes they'll have armies to back them up, but more often than not, they'll work alone, relying on their incredibly vast cosmic powers to crush the good guys. Many have both.

These characters are usually male, although modern works are offering more and more females the opportunity to enslave entire galaxies. Distinguishable from the Eldritch Abomination in that these guys have somewhat human motives for what they do. Often, this is what the Sealed Evil in a Can turns into once it's unsealed. Take this Up to Eleven, and you get a Multiversal Conqueror.