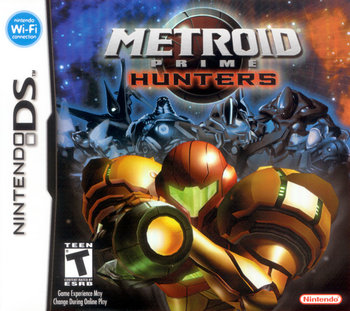 Metroid Prime: Hunters is a game in the Metroid series, released on the Nintendo DS in 2006. A Gaiden Game to the Metroid Prime Trilogy, it was developed by the Nintendo Software Technology — Nintendo of America's in-house development studio — rather than Retro Studios as with the other Prime games.

While it was released after Metroid Prime 2: Echoes, the game takes place before it in the official timeline, making it the third entry in the series' chronology. The plot sends Samus Aran to the Alimbic Cluster, a mysterious area of the Tetra Galaxy where a lost race called the Alimbics once had an interplanetary empire. After the Galactic Federation intercepted a telepathic message claiming that "the secret to ultimate power resides in the Alimbic Cluster", they contracted Samus to travel to the cluster to find the truth behind the message. Of course, other bounty hunters have followed the message as well, seeking the ultimate power for their own reasons, so Samus must fight off these rivals as she attempts to solve the mystery of the Alimbics.

Like the console Prime games, Hunters plays in a first-person perspective, and includes numerous lore scans to reveal the game's story and details of the world. It tends to be less focused on exploration than other Metroid games, however, being closer to a regular First-Person Shooter, though new weapons will allow access to new areas of previously-explored planets.

Alongside the single-player campaign, Hunters also includes a multiplayer mode, playable through local wireless as well as (formerly) online through the Nintendo Wi-Fi Connection. This mode allows any of the bounty hunters to be played, each of whom has their own signature abilities.

An early demo version of the game called Metroid Prime Hunters: First Hunt was packed in with the Nintendo DS hardware for a while, which included three single-player modes as well as a local multiplayer mode.