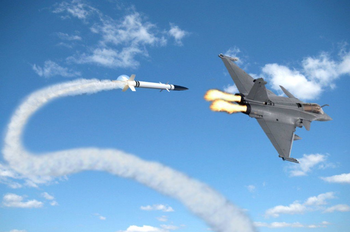 "THAT LOOKS LIKE A HOMING SHOT!"
"Our .50-caliber bullet can guide itself to a hit half a mile away."
— Larry Shipers
Advertisement:

A projectile or attack in interactive media (or a narrative description in non-interactive media) that homes in on its intended target. If you're firing it, it can be an effective means of eliminating targets without putting yourself in harm's way. If an enemy is firing it, you'll need to perform a High-Speed Missile Dodge, whip out a shield, trick its guidance system, Shoot the Bullet if it is destructible, or just outrun it until it loses steam.

A curious trait of most homing attacks is their inability to "lead" a moving target, resulting in them doggedly "trailing" behind if the target can move fast enough. Very few homing attacks will actually plot an intercept course on a moving target. This can often be justified, however, since "mere" tracking requires far less advanced software (and hardware) than proactive interception.

Compare and Contrast with Player-Guided Missile. See also Flying Weapon, which has a tendency to chase after the target.

May or may not be a Pocket Rocket Launcher

When it detects an enemy after being thrown, the Torpedo unfolds in midair and homes in on the target.

When it detects an enemy after being thrown, the Torpedo unfolds in midair and homes in on the target.