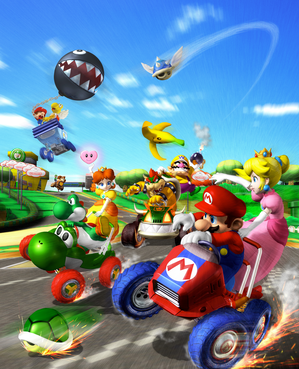 Double the players and twice the dash!
Advertisement:

Mario Kart: Double Dash!! is the fourth installment of the Mario Kart series, released in 2003 on the Nintendo GameCube.

Changes from the previous installments include, most noticeably, the fact that players must choose two characters per kart, which means that two players can also play as one kart. And every two characters share a special item that is exclusive to them (save for King Boo and Petey Piranha, who can use any special item). Also unique to this game is All-Cup Tour, which is a fifth cup in which every course must be completed in a random order, always beginning with Luigi Circuit and ending with Rainbow Road. None of these features have been brought back in any other game, though Mario Kart 8 Deluxe would bring back the ability to hold two items at once. The game consists of twenty characters overall, the highest amount for a Mario Kart before Wii had twenty four, which means ten pairs. Eight karts on the track at all times.