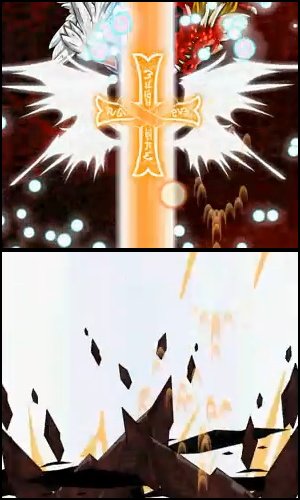 Holy Crap!
"And Saint Attila raised the Hand Grenade up on high, saying: O Lord, bless this Thy hand grenade, that with it Thou mayest blow Thine enemies to tiny bits, in Thy mercy."
— The Book of Armaments on the Holy Hand Grenade of Antioch, Monty Python and the Holy Grail
Advertisement:

Simply put, this is when the Power of Good, which is supposedly devoted to light, love, peace, forgiveness, health, and happiness, is instead used to crush, maim, desiccate, disembowel, and destroy.

This can easily come into play when Good Is Not Nice, or when one is nice but Good Is Not Soft.

Can often be directly in a cycle of Elemental Rock–Paper–Scissors, but can just as often be separate, used as a direct counter to dark magic. Weapons that are Made of Good (including Silver) are also this. Expect any Church Militant to have tons and tons of such items.

In general, Good Hurts Evil, and "Light" or "Holy" magic tends to work most effectively on demons, undead, and other Always Chaotic Evil creatures. In RPGs, these tend to include most of the main enemies at the end of the game. In some games Holy is sometimes treated as the Infinity +1 Element, or a way to induce Villainous BSoD.

Game designers may counterbalance this by giving the Light spells to the White Magician Girl or The Medic, since they'll usually be occupied with healing duty and won't be able to go nova on the enemy as often as the black magic wielder.

A Sub-Trope of Elemental Powers and White Magic.

A Super-Trope to Revive Kills Zombie and Turn Undead.

A Sister Trope to Light 'em Up (and can overlap when Light Is Good), Bolt of Divine Retribution (for when God cuts out the middleman), Holy Is Not Safe (where holiness is inherently dangerous even when not weaponized), and Prayer of Malice (when someone asks God to do the smiting Himself).

This item is available for sale in the Trope Co. catalogue.