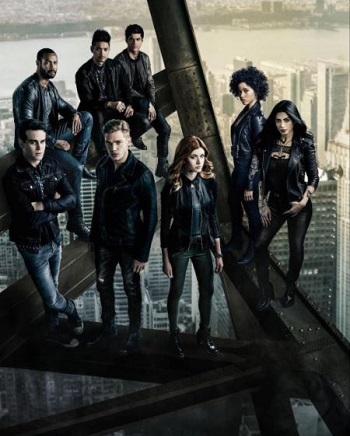 Shadowhunters is a Freeform series based on the novel series The Mortal Instruments by Cassandra Clare. It was the second attempt to adapt the books after the ill-fated 2013 film adaptation.

Eighteen-year-old Clary Fray finds out on her birthday that she is not who she thinks, rather, she comes from a long line of Shadowhunters — human-angel hybrids who hunt down demons. When her mother Jocelyn is kidnapped, Clary is thrown into the world of demon hunting with mysterious Shadowhunter Jace and her best friend, Simon. Now living among faeries, warlocks, vampires and werewolves, Clary begins a journey of self-discovery as she learns more about her past and what her future may hold.

Like the film, the show was produced by Constatin Film and McG (Joseph McGinty Nichol), but with Ed Decter as showrunner. A 13-episode straight-to-series order was announced on March 30, 2015, the show began filming in Toronto, Ontario on May 25th, 2015, and the series eventually premiered on January 12th, 2016. After three seasons, the show was cancelled in 2018, but an additional two episodes were ordered to give closure.

While the film is a straight adaptation of the first book, the show is more of a Pragmatic Adaptation of the series. Some events have been repurposed or changed entirely, and characters are switched around, with roles being given to new or other characters. That said, it still follows the general plot of the books.

Teaser trailers can be viewed here

. Officially released sneak peaks of the first episode can be viewed here

Outside of the United States, new episodes are available worldwide on Netflix.