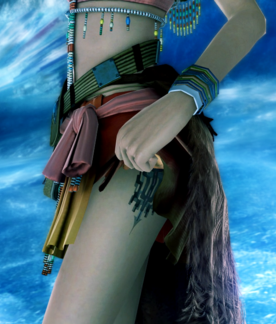 Good thing she has her fur skirt to keep it hidden.
Deral: I was admiring... your markings. Are they decorative?
Jadzia: No. Are yours?
Deral: No. If you don't mind me asking... how far down do they go?
Jadzia: All the way.
— Star Trek: Deep Space Nine, "Meridian"
Advertisement:

This trope is about characters with some sort of writing, markings, symbols or pictures on their naughtier bits, whether written on their clothes or displayed on their bare skin. This is often used as a tactic to deliberately draw attention to the said area, especially if paired with Male Gaze, Female Gaze, or clothing such as bikinis or thongs. Some clothes designers intentionally put their logo here, or sell clothes with attention-grabbing marks as an advertising gimmick. ("Snorg Tees" is particularly egregious about this.)

For the purposes of this trope, the qualifying areas are the chest (on women), the crotch and inner thigh, and the buttocks. Marks found on other areas, such as shapely legs, bared midriffs or a bare back do not count. Marks just shy of these areas (just above the breast, buttocks, or crotch) are passable, though.

Some examples may overlap with Embarrassing Tattoo. Can also overlap with Brought to You by the Letter "S" and Chest Insignia, if the insignia is somewhere that you shouldn't be looking for more than a second. See also Tattoo as Character Type.

This page is not for how awesome, sexy, or cute said character's breasts, butt or other body part is. This is merely a catalog of said characters or examples of the trope in media.