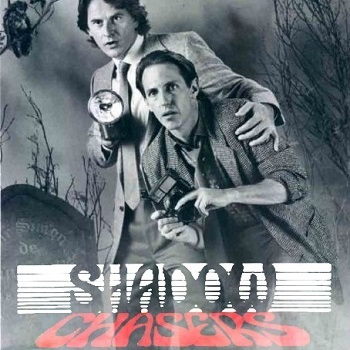 A sci-fi/fantasy/horror/mystery series that aired on ABC in 1985–86.

Jonathan MacKensie (Trevor Eve) is a British anthropology professor at the Georgetown Institute of Science and Technology in Washington, D.C.. Jonathan has a bright academic future ahead; unfortunately, he finds himself getting blackmailed by his department head, Dr. Julianna Moorhouse (Nina Foch), into investigating paranormal occurrences. Along the way, he meets tabloid newshound Edgar "Benny" Benedek (Dennis Dugan) and they get involved into weird cases involving hauntings, possessions, curses, vampires, werewolves, a hospital "death angel", aliens and even time travelers. And a dragon.

Easily the least successful series ever thought up by major TV Creator Kenneth Johnson, Shadow Chasers didn't even get a full broadcast of its thirteen-episode first (and only) season. Fairly understandable, since it was going against powerhouses of the moment like The Cosby Show and Magnum, P.I. Still, it is interesting if only because its formula of a straight-laced academic skeptic paired with a fast-talking, worldly believer investigating paranormal activities predated The X-Files by a decade. The show also had a proper wrap-up last episode, something somewhat unusual for series at the time.

Do not confuse this with the fanfic Shadowchasers Series, which is a YuGiOH! fic series.