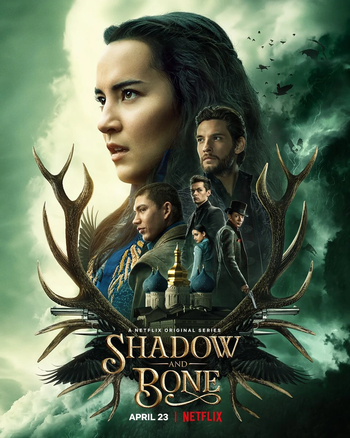 "Bring the light."
"When I was young, I was afraid of the dark. When I got older, I learned that darkness is a place, and it’s full of monsters."
— Alina Starkov
Advertisement:

A Netflix-produced fantasy show based on Leigh Bardugo's worldwide bestselling shared universe of The Grishaversenote primarily adapting Shadow and Bone, the first book of The Grisha Trilogy, and utilizing some characters from Six of Crows, Shadow and Bone begins in war-torn Ravka, a land which not only battles on two separate fronts against its industrially superior neighbours, but also suffers division within its own borders. Literally; the country is split in two by the Shadow Fold, a colossal wall of unnatural darkness filled with terrifying monsters ready to feast on anyone who dares to cross from one side of the Fold to the other. And yet to sustain both the country's war efforts and its dwindling eastern territory, the soldiers of Ravka's First Army must constantly risk their lives to make that journey.

Then, when her expedition is attacked and nearly overwhelmed, lowly soldier and orphan Alina Starkov (Jessie Mei Li) abruptly unleashes an extraordinary power that could be the key to setting her country free. With the threat of the Fold looming and the darkness ever increasing, Alina is torn from everything she knows — including Malyen Oretsev, (Archie Renaux) her childhood best friend — to train as part of an elite army of magical soldiers known as Grisha, who comprise Ravka's Second Army and are led by the immensely powerful and intensely driven General Kirigan (Ben Barnes).

But as she struggles to hone her powers and comprehend her new role as Ravka's apparent saviour, Alina discovers that allies and enemies can be one and the same, and that nothing in this lavish world is as it seems. There are dangerous forces at play — from the royal palaces of Os Alta to the far-off city of Ketterdam, where a trio of charismatic criminals are rising from the slums to take on a high paying and high-stakes contract — and it will take more than magic to survive.

The first season premiered on Netflix on 23rd April 2021. A second season has been announced.

'Building The World' behind the scenes featurette

Shadow and Bone provides examples of: