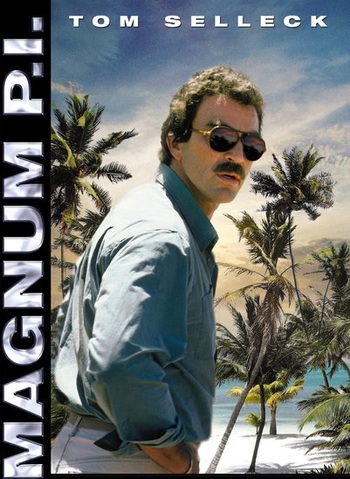 Women just love the moustache.
"When I created 'Magnum, P.I.' I got thousands of letters from Vietnam veterans thanking me for portraying Vietnam veterans who were something other than killers and drug addicts and crazy and unable to function in society...they just loved it."
— Donald P. Bellisario
Advertisement:

Created by Donald P. Bellisario and Glen A. Larson and airing on CBS from 1980 to 1988, Magnum, P.I. seemed at first glance to be yet another Action Series show, using the old Hawaii Five-O production facilities in Hawaii, with a handsome lead actor talented in comedic schtick and the usual buddies helping him solve his case-of-the-week. But it soon revealed its more dramatic plot threads by alternating the comically-toned episodes with those concentrating on The Vietnam War background of Thomas Magnum and his friends. The concluding scene in the season three two-part premiere "Did You See the Sunrise?" was the key moment that illustrated Magnum's darker side. It remained the most unexpected and controversial scene of the series' entire run.

These deeper character-developing episodes became fan favorites, and helped to spur the series to a five-year stay in the top-20 rated shows on television between 1981 and 1985. Also, both Tom Selleck (Magnum) and John Hillerman (Higgins) won multiple awards for their work.

Magnum was assisted ably by his friends Theodore "T.C." Calvin and Orville "Rick" Wright, and alternately helped and hindered by Jonathan Quayle Higgins III, the manager of insanely wealthy best-selling author Robin Masters' estate where Magnum lived. Masters was only occasionally heard as The Voice of Orson Welles via telephone.

Donald P. Bellisario (who unlike Larson had a lot to do with the series after the pilot) became known for his darker, almost fantastical overtones (see Quantum Leap), and they were introduced slowly into Magnum, P.I.'s storylines by way of prophetic dreams, psychic connections, and ghosts.

In February 2018, a reboot of the series was announced with Jay Hernandez playing Thomas Magnum. This is the third remake Peter Lenkov has done for CBS and is included in the shared continuity with the 2010 version of Hawaii Five-0, and by extension with JAG and its spin offs (NCIS, NCIS: Los Angeles, NCIS: New Orleans), Scorpion and MacGyver (2016). It was cancelled in May 2022, but in the following June, NBC picked it up the series for a fifth and sixth season renewal.