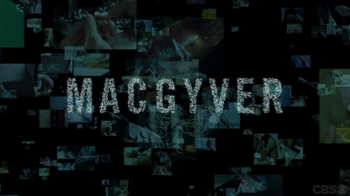 The 2016 Spy Fiction-oriented television Continuity Reboot of MacGyver, trading the focus the original series had on social justice and civic responsibility, with a lot more guns and terrorism. It stars Lucas Till, George Eads, Tristin Mays, Justin Hires, Sandrine Holt, Levy Tran, Meredith Eaton, and Henry Ian Cusick. The series premiered September 23, 2016 on CBS and has aired for four seasons.

The show is airing the fifth season from December 2020. CBS announced that it'll serve as the last season.

The series centers around Angus "Mac" MacGyver, an agent working for the Department of External Security (DXS), an American black ops agency that operates as a Washington-based think tank foundation. The main storyline of season one begins during an op to secure a WMD, when he's forced to relinquish said WMD to save Nikki Carpenter's life. After she was killed in the field, Mac is forced to reevaluate himself and recruit someone else. After they realize that Nikki is a mole, DXS stops her, but not before Patricia ordered the DXS to be shut down due to being compromised by Nikki. From there on, Mac and the others continue to work in the Phoenix Foundation, protecting the U.S from domestic and foreign enemies.