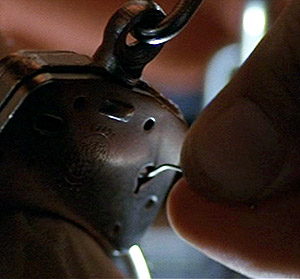 "Another fine illustration of your need for tactical assistance. Admit it, Michael. You need me. You don't even have your own hairpin."
— Fiona Glenanne, "False Flag", Burn Notice
Advertisement:

Alice and Bob are in a tight situation; maybe they need to break into a closet, or maybe they have been locked up by the bad guys. Either way, a lock is blocking their... way. Bob's mind is racing. How are they going to get out? And what is that ''click!'' he just heard? Wait a second... did the lock just open?!

Alice holds up something. "My Handy Hairpin," she says. "Don't leave home without it."

When a resourceful character picks a lock, be they handcuffs, doors or secret diaries, with a hairpin, paper clip, or similar, you get the Hairpin Lockpick. Most often utilized by females as they are way more likely to have a hairpin actually on their person.

This is Truth in Television, as locksmiths and amateur enthusiasts can jimmy a lock with materials like paper clips and hair pins quite easily. However, unless it's a very simple lock, you have to break it in half and use one piece as a torsion wrench and the other as the pick.