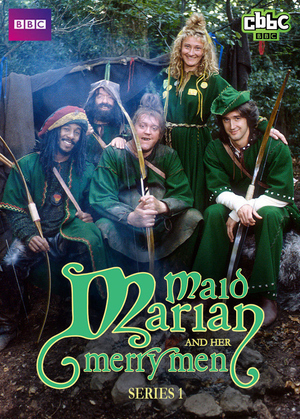 "They've got the power, they've got the weapons. All we've got is a Rasta, a wally, and a bearded avocado."
—Marian
Advertisement:

Maid Marian And Her Merry Men was a children's Sitcom made by The BBC, based on Robin Hood and written by Tony Robinson, who also played the Sheriff. Calling it a kids' version of Blackadder is trite, obvious and (to a certain extent) true. However, it's much more Denser and Wackier.

The concept was that Robin wasn't a noble outlaw hero at all, but a clueless yuppie who had inadvertently got involved with the revolutionary schemes of Maid Marian, presented here as the real brains behind the operation. Joining them were Little Ron (a vertically-challenged bruiser), Rabies (a large and very stupid peasant) and Barrington (a Rasta, despite Rastafarianism not existing yet). Much to Marian's exasperation, none of them were particularly reliable, least of all Robin, who spent most of his time designing their outfits (except when he started believing the hype and thinking he was the leader).

Prince John, technically the leader of the forces of oppression (or "Ye Baddies", as the credits had it), was usually portrayed as an unstable Psychopathic Manchild, leaving the actual scheming to his Dragon, the Sheriff of Nottingham. The Sheriff's two Mooks, Gary and Graeme, were almost as stupid as Rabies.

Since Marian and the Sheriff were the only intelligent people within walking distance (the villagers were just as bad), they were usually the only ones the other felt they could talk sensibly with, even though they were on opposing sides. Somehow, this never made the Sheriff look like a Punch-Clock Villain; he was just biding his time until he could catch the whole gang.