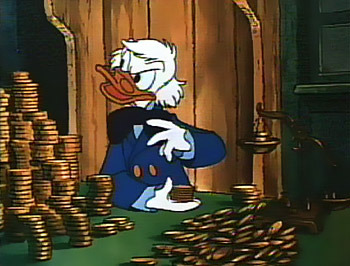 Low interest community loans? I have no money for such foolishness!
"When you need to borrow money the Mob seems like a better deal, I think. 'You don't pay me back I break both yer legs.' Is that all? You won't take my house or wreck my credit rating? Fine, where do I sign?"
— Craig Ferguson
Advertisement:

A subtrope of Acceptable Targets. The Morally Bankrupt Banker is unsympathetic, both as a character and to other characters. However, on the one hand henote (this trope is pretty much Always Male) does have a tough job; when someone needs that third loan extension and he says "No", it's not out of malice but to protect the savings of other bank patrons to avoid spending good money after bad. When deciding to issue a loan, he has to carefully consider whether the debtor has a decent chance of paying it back, because a bad loan hurts the debtor, the bank and its customers. On the other hand, it's more likely he has a small shrine to Ebenezer Scrooge and says "No" because the debtor is at fault for being poor in the first place and he wouldn't know how to use the money anyway. When it comes time to make loans, he'll give them out gleefully with Read the Fine Print details making it a Leonine Contract that turn up the interest rates like a thermostat until it's time for the repo man to impound some unfortunate ambitious dreamer's property.

And this is just a branch manager — the bank's CEO is probably a Corrupt Corporate Executive who would rather embezzle and gamble with the customers' money than make prudent investments. More generally, the Morally Bankrupt Banker is likely an Obstructive Bureaucrat, Lawful Neutral or Lawful Evil, and a Rules Lawyer.

A quick way to tell whether a banker is meant to be sympathetic is which of the following is his attitude toward money: "That's the bank's money" (unsympathetic), "That's my money" (really unsympathetic) or "That's our customers' money" (run). Another is his reaction when he hears a plea for help. A snide remark about "all the sob stories" he hears is pretty much this trope's Kick the Dog. On the other hand, if he goes out of his way to offer the customer an extension, move around deadlines, extend refinancing offers, or otherwise give the customer at least a chance at paying back a debt or getting a much-needed loan, then he's likely averting this trope and being sympathetic- or possibly feigning niceness and being lenient just for the moment. Oh, and if he's also in the real estate biz, there's probably already a model in his office of whatever condo/nightclub/resort/casino he plans to build on your property once he inevitably forecloses on it.

This may possibly be a Cyclical Trope; examples became popular during and after The Great Depression in the 1930s, and more recently in the global recession of 2008.

See also Loan Shark and Evil Debt Collector. Expect them to try to get back any money they lend through a Ridiculous Repossession.

The Iron Bank is absolutely ruthless with defaulters, regardless of their reasons or status - to the point of hiring hitmen to drown merchants in the canals.

The Iron Bank is absolutely ruthless with defaulters, regardless of their reasons or status - to the point of hiring hitmen to drown merchants in the canals.