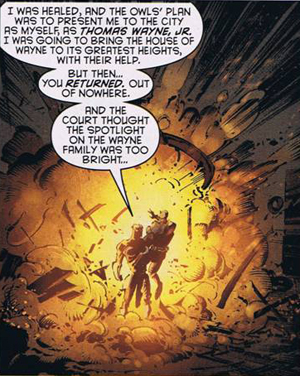 Good thing Batman had his Bat-Noise-Filters in place or he would have missed that whole Info Dump.
Advertisement:

In real life, even in the best of circumstances we often have to repeat ourselves to be understood by the people we're talking to.

In fiction, when conversations are taking place, they will sometimes benefit from a strange, localized phenomenon of crystal clear acoustics. It doesn't matter if they consist of several paragraphs of Sesquipedalian Loquaciousness, the words will be heard without any trouble by both target and audience, even in the midst of a crowded nightclub dance floor being buzzed by a Boeing 747. A particularly handy feature for The Quiet One, but also for action heroes making sure the villain hears their cool Pre-Mortem One-Liner despite them both dangling from a speeding helicopter.

A variation of this would be The Hero making a speech or any crucial information that somehow manages to reach his allies without any aids regardless the distance.

Sometimes you might have to go so far as to TALK! LOUDLY!, but don't worry — unless it's a Plot Point that you shouldn't hear each other, then damn the acoustics, full speed ahead!

This is an Acceptable Break from Reality as the audience needs to understand what's being said most of the time. Also, realistic repetition of sentences that weren't heard the first time would only constitute Padding.

Related to Easily Overheard Conversation, Seven Minute Lull, Stage Whisper and (distantly) Realistic Diction Is Unrealistic, as well as Talking Is a Free Action for a different sort of an unusually nonproblematic conversation. For the effect that loud sound doesn't have on the ears in Hollywood, see Steel Ear Drums.

Contrast Fake Static, Plot-Based Voice Cancellation and Sound-Effect Bleep for when the writers are inserting rather than ignoring audio obstacles.

Part of the Artistic License tropes.