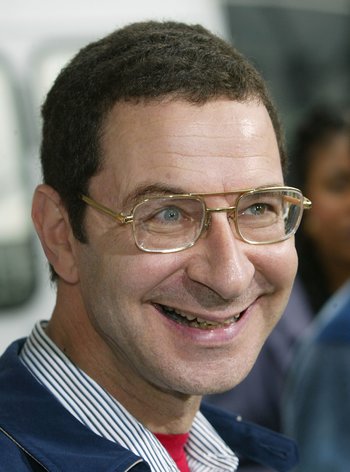 ''Wow. That's very cool. I don't think of myself as being famous enough to get pages like that on those kinds of trivia websites."
Eddie Deezen, upon finding out that he had a TV Tropes page.
Advertisement:

Edward Harry Deezen (born originally spelled "Dezen" on March 6, 1957 in Cumberland, Maryland) is an American character actor, voice-over actor, writer, and comedian. He was a class clown in school, and as an adult originally had aspirations of becoming a stand-up comedian. He moved from his hometown of Cumberland, Maryland to Hollywood within days of graduating high school. He performed several times at the The Comedy Store before abandoning stand-up to concentrate on acting. His last appearance as a stand-up comedian was on The Gong Show, where he was gonged by singer-songwriter Paul Williams.

Since then, Eddie has made a living out of being the quintessential nerd, starting with his first big role, Eugene in Grease. From that start, he went on to play nerds, geeks, and spazzes in such films as Laserblast, Grease 2, Midnight Madness, 1941 and WarGames. He also had larger roles (and occasionally starring roles) in a number of independent cult films, including Rock 'n' Roll High School, Surf II: The End of the Trilogy, Mob Boss, I Wanna Hold Your Hand, Beverly Hills Vamp, Teenage Exorcist, and of course, I Love You, Eddie Deezen, wherein he not only got to play himself, he got to play himself as a romantic lead.

As a voice actor, his voice is high-pitched, nasally voice is easily recognized (he claims that his inability to memorize scripts fast enough has made performing with one in front of him more convenient). He has voiced Mandark (and his sister) from Dexter's Laboratory, Snipes the Magpie in Rock-A-Doodle, Ned in Kim Possible, Lenny the Know-It-All in The Polar Express, and The Guy Boarded Up In The Wall on The Weird Al Show.

Eddie Deezen is also One of Us. In addition to being the world's biggest fan of The Beatles (a claim that he has successfully defended several times - hell, he played an obsessed fanboy in I Wanna Hold Your Hand!) he is a pop-culture expert of monumental proportions. Since 2011, Eddie has been a contributing writer for mental floss

, concentrating on not only The Beatles, but on baseball, American history, and classic comedy acts like Laurel and Hardy, the Marx Brothers, the Three Stooges, and Martin and Lewis.

Eddie Deezen is a genuinely nice guy who takes care to give back to his fans, with whom he has a surprisingly open and casual relationship over social media networks like Facebook.